You are on the page Hotel Richmond Teplice / Tips for trips

in the surroundings of the hotel Richmond Teplice

Church of St. John of the Baptist

Decanal Church of St. John of the Baptist was built at the site of older church during years 1585-1594. Its Renaissance structure was rebuilt in the Baroque style in 1700-1703 probably by local master mason Kristian Lagler. The church is three-aisled basilica with rectangular presbytery and massive prismatic bell tower (1707) with observation gallery and adjacent stairway turret. In church's crypt are tombs of two noble families, formers owners of the Teplice demesne, Vchynský and Clary-Aldringen. In the church's Baroque and Rococo interior you can find valuable altar paintings from Petr Brandl's circle ("Christ's Baptism" on the high altar, the painting of St. John of Nepomuk on the left altar and the painting of St. Christopher carrying the Christ Child on the right altar). In early 1990s, the church was completely reconstructed. During summer season, the church bell tower is open for visitors and its gallery offers beautiful views over Teplice' historic centre. 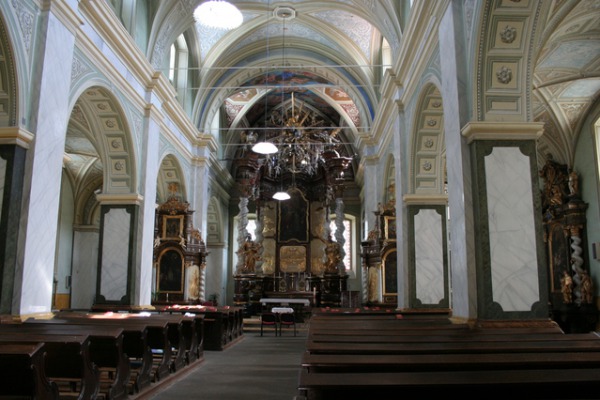 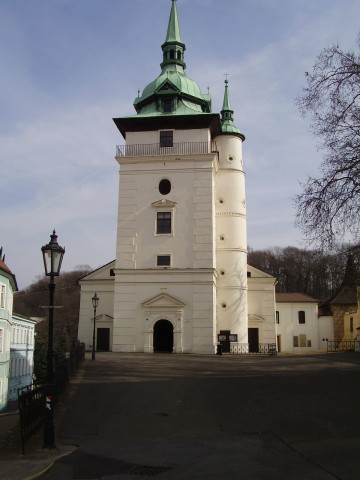 In 1862, Teplice inhabitants celebrated the eleven-hundredth anniversary of the legendary discovery of the local healing springs. In its commemoration, Ing. Adolf Siegmund designed a fountain, which still decorates the Spa Orchard. The fountain is not preserved completely; until the war, it was dominated by a statue of a female bearing an ancient amphora – a Nymph of springs. The fountain decorated with swine heads commemorates the accidental discovery of the thermal spring by a swineherd. According to the medieval chronicle, dated 1539, by Václav Hájek of Libočany, the swineherd used this way to drive the herd to pasture. A little swine, weaker than the rest, used to limp behind. Once, the swineherd noticed that the little swine would regularly disappear and then stop limping. He followed it to a place where hot steam rose out of mud. The news about the healing spring reached the landlord Kolostůj, the yeoman of Bílina. Thanks to him people from the surrounding area could use the springs for healing purposes. Hájek's original version did not contain any direct mention of the swines; it was added to the story only in 1607. There are many versions of this legend circulating among people, but one thing is clear: none of the stories are true. The healing springs had already been demonstrably found and used by the Celts. The date 762 was determined rather randomly. 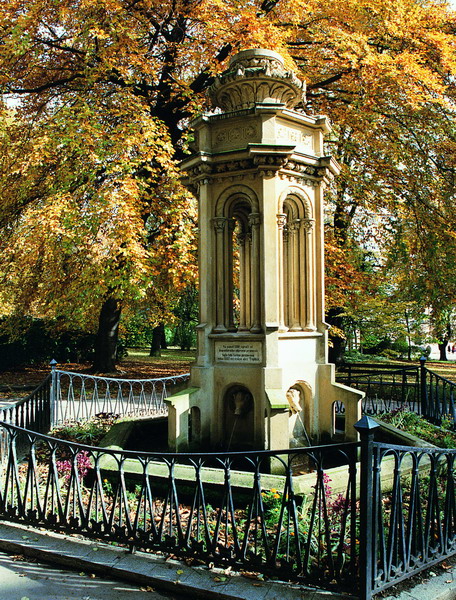 Teplice can boast examples of Romanesque, Gothic, Renaissance and mainly Classicist and Empire architecture, but there are not many preserved Baroque monuments. An exception is The Holy Trinity Plague Column in Chateau Square. In Catholic countries columns similar to the one in Teplice used to be built in the 17th and 18th century as a thank-you or a request for protection. They attained their special importance in times of plague. Bohemia suffered the worst plague epidemic during the Thirty Years' War, i.e. in the first half of the 17th century. The Black Death raged in the Czech lands in 1713, too, but it avoided Teplice; therefore, the Teplice estate owner of that time, Franz Karl Clary-Aldringen, had this magnificent column of splendid artistic rendering erected. The column was also to commemorate reconciliation among four brothers of the Clary-Aldringen family. The contract was awarded to the workshop of Matthias Bernard Braun, who authored the famous sculpture decoration at the East-Bohemian chateau of Kuks and the Duchcov Chateau. Assisted by a local stonemason Baumel, Braun carried out the contract between 1718 and 1719; the column represents Braun's highest work. The column was originally conceived as a fountain, nowadays no longer in operation. The monument is dedicated to the Holy Trinity. On the earthly sphere God the Father and Jesus Christ as the Son are seated, with the Holy Ghost in the form of a golden dove perching above them. In the lower part six saints can be found. Saint Charles Borromeo is rendered with a cardinal's hat. He was an archbishop in Milan, looked after the diseased during a plague epidemic, sacrificing all his property and his life. The saint with a dog is Saint Roch. Legend has it that he survived the Black Death only thanks to his fervent prayers and the loyalty demonstrated by his dog, which, during Roch's sufferings, would bring him cob loaves to his hermitage in the woods. The last saint is Saint Sebastian, tied in chains and pierced with arrows. All three were worshipped as patrons against plague. The three above them are Saint Jerome with a skull and the bible, Saint Paul looking towards the "Stadt Klagenfurt" house, and finally, with a golden cross, John the Baptist, patron of Teplice. In the past, the column was damaged several times. At the end of the nineteenth century, three sculptures were replaced with copies and the original pieces are now exhibited in the Duchcov Chateau's collection of stone monuments. 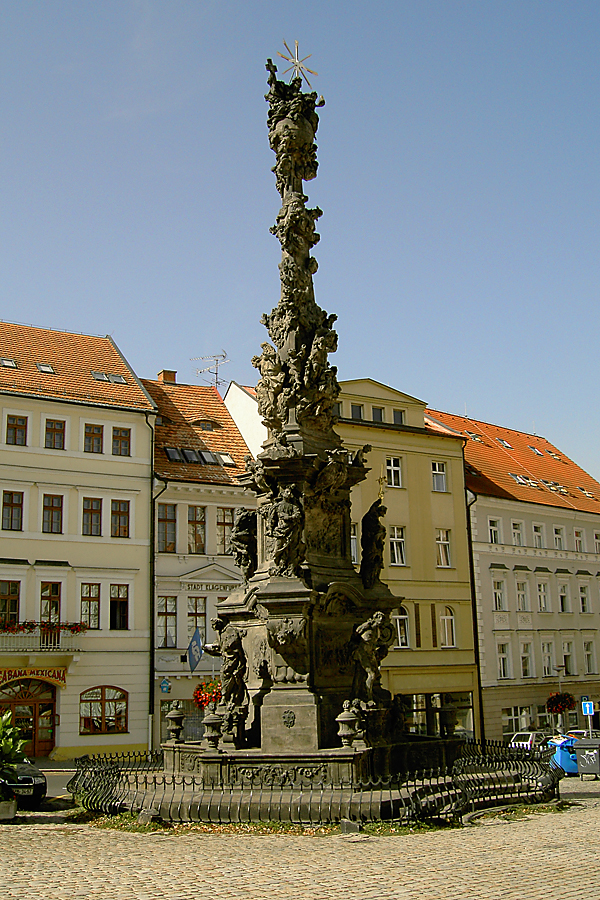 The Fountain was fitted in the middle of Laube square, across the street from the hotel. It Represents a mastery of the traditional local material-glass. 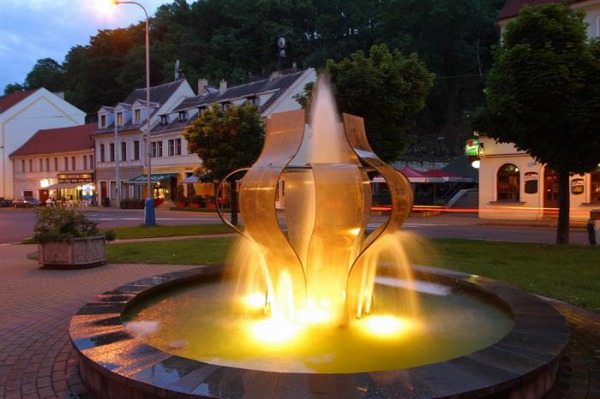 The Chateau Park originated in the 16th century together with the construction of the chateau, when stone-built castles went out of fashion and the nobility moved to more comfortable and representative residences. The Jesuit Bohuslav Balbín, who was familiar with its Baroque appearance, considered it one of the most beautiful parks in the Bohemian kingdom. The park design changed with fashion, this time assuming French patterns: green mazes, grottos, fountains and carefully planted, geometrically perfect flower beds were added. Further changes were performed at the end of the 18th century by Johann Nepomuk Clary-Aldringen, the new owner of the Teplice estate. This time the garden transformed into an English park: the flower beds were substituted by vast lawns, ponds and rare trees. The park stretches around the Upper and Lower Ponds. In the middle of both ponds there are artificial islands, the one in the Upper Pond bearing the name of Elisa Alexandrina, Prince Edmond's wife. In the past the island used to be accessible via a small cast-iron bridge with an ornamented gate carrying the sign “Elisalex Insel”. A wooden gazebo, still in existence but quite damaged now, used to serve as a sheltered mooring for the princely family's boats. The family used to hold evening cruises on gondolas while musicians played Mozart's pieces. The Chateau Park also contains a classicist gazebo and a number of statues gathered from the vicinity, Beethoven's bust, a plaque marking the legendary meeting of Goethe, Beethoven and the emperor's family, a closed municipal lido and a chateau theatre where weddings take place. In its gable, Cupids hold a sun disc and a lyre, symbols of Apollo, the Greek god of art. In 1936, a spa guest wrote in her notes about the garden: “Peace and quiet breathe out here, one is protected from the troubles and pains of life, deep tree shadows form a wall between our everyday life and a piece of a dream we indulge in. When will Goethe's figure appear on this path? Hasn't Beethoven just passed that bush with his head bent down? Wasn't that Wagner's head looking out behind that thick trunk?” We are not sure whether you will spot the European greats in the park. In any case, you can observe and feed squirrels, swans, ducks and fat carps. The playground “At the monkeys” is a popular place for families with children; please, do not feed the monkeys.